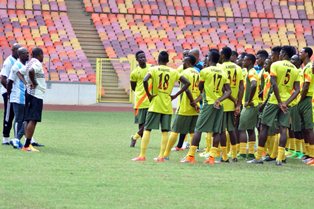 The Nigerian Professional Football League, Nigeria’s top tier of football, was established in 1972.

The 45th season ended in October this year, with Enugu Rangers International lifting the trophy , followed closely by Rivers United, both of whom will compete in the 2017 CAF Champions League.

At the other end of the table, Warri Wolves, Heartland, Ikorodu United and Giwa were all relegated to the Nigeria National League, with Giwa being expelled for failing to complete three home fixtures in a row.

Enugu Rangers have now won 7 Nigerian Premier League titles, putting them level with Enyimba, although this was their first league title since 1984.

Attacker Chisom Egbuchulam netted 13 times throughout the season to help keep them to reach the top spot.

The Flying Antelopes need to build on their strong season and retain their star players to keep any hopes of retaining the title alive in 2017.

The 2015 champions Enyimba were nowhere to be seen in 2016, spending the first half the season in and out of the relegation spots before managing to finish 9th.

Their foray into the CAF Champions League was equally disappointing, finishing third in their group. Wikki Tourist had a promising run of games in the middle of the season, sitting at the top of the table for seven consecutive games, but dropped vital points  in the last few weeks of the season.

Wikki need to focus on pulling out the stops when the going gets tough in the final third of the season in 2017.

All eyes turned to the bottom of the table in week 18, when Giwa were suspended from the Premier League after failing to play three home games in a row.

Giwa had been suffering from crowd trouble and had to move games to Ilorin following a match against Rangers International that had to be abandoned due to disturbances.

Despite an attempt to reinstate the team, they failed to complete any further matches and finished the league on zero points. There was also a big shock for Warri wolves, who finished second in 2015 and made it to the CAF Champions League first round.

After a tough season, they failed to make it to the group stage and eventually slipped into the bottom four in the last 8 games of the season.

Both teams must bounce back straight away, with Warri Wolves looking the best bet in the second tier of Nigerian football.

Looking to the 2017 season, odds are now beginning to pop up for outright winner, top scorer and relegated teams.

Gambling on the games is great when the season throws up some amazing results as it did in 2016, but it isn’t fun having to wait until the games kick off again in January.

Why not get that winning feeling by trying out a slots game like Soccer Safari via casino online.

This fun game has a cool Safari theme complete with Cheetahs, Buffalo and Rhinos and is ideal for picking up some winnings during the break.

Make sure you do your homework before betting on the team you think is going to win in 2017. Why not boost your betting funds by hitting it big on Soccer Safari!