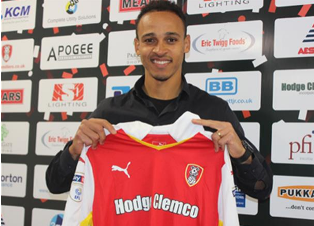 Relegation-threatened Rotherham United lost for the seventeenth time in the EFL Championship after they were beaten 2-1 by Burton Albion at New York Stadium on Thursday night.

First-half goals from Chris O’Grady and Jackson Irvine put the visitors 2-0 up before English-born Nigerian midfielder Tom Adeyemi gave his team hope with a goal in the 45th minute.

The Cardiff City loanee pounced to stab home as Albion failed to clear a free kick. It was his second goal in the league this season.

In the second half, Rotherham United went all out for an equalizer but were unlucky not to score despite the introduction of their Nigerian star Peter Odemwingie in the 67th minute.

Odemwingie’s powerful low drive was saved by the goalkeeper on 76 minutes, and saw his free-kick saved again with four minutes left on the clock.