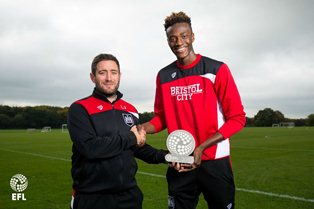 In-form English-born Nigerian striker Tammy Abraham bagged a brace but his goals were not enough as Bristol City lost 3-2 to Reading in the EFL Championship on Monday after conceding a late, late goal.

The Chelsea loanee gave the home team the lead in the 27th minute, when he fired home from close range after Bryan saw his initial effort parried.

It became 2-0 two minutes after the restart, Abraham converted his spot kick after the referee blew for a penalty for a foul on  O’Dowda.

The visitors secured all the three points courtesy of a goal from Liam Kelly and Yann Kermorgant’s brace.

Abraham, 19, has found the net in each of his last three games for Bristol City.