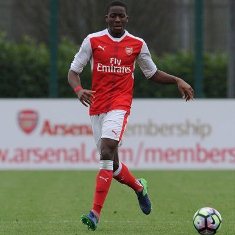 The highly-rated young Nigerian defender Joseph Olowu will fancy his chances of breaking into the first team of Arsenal in the not too distant future.

Four years after his arrival at the Emirates Stadium outfit, the center back played his first competitive game for the Gunners U23 squad in their 21 win over Derby County in a Premier League 2 fixture at London Colney on Friday.

Olowu gave a good account of himself on his debut, with the Rams scoring once against the run of play in the second half.

He signed scholarship terms with Arsenal in June 2016 alongside good pal, Tobi Omole.

Olowu, who models his game after France star Laurent Koscielny starred for Arsenal U16s last season, and is now an important member of the U18s.