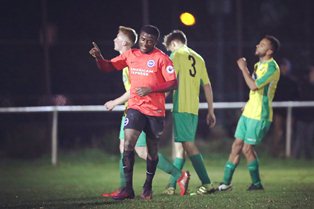 David Ajiboye was on target as Brighton U18 beat Arsenal 2-1 in an U18 Premier League fixture on Monday.

The 18-year-old was making his tenth appearance of the season for the Seagulls in the U18 Premier League, and was named in the starting XI while Arsenal defender Tobi Omole stepped out onto the pitch after 64 minutes.

Arsenal broke the deadlock 14 minutes into the second half when Joe Willock converted a penalty, but the visitors restored parity in the 84th minute after an own goal from Kostas Pileas.

The game was heading for a draw until David Ajiboye stepped up to net the winner in the 89th minute.

The English-born talent also qualifies to represent Nigeria and Jamaica at senior level.