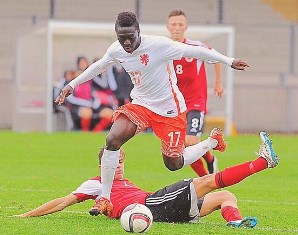 Liverpool teen sensation Bobby Adekanye won the Player of the Tournament award at the 15th edition of the ebm-papst Indoor Championships in Mulfingen, Germany.

And to add to his individual accolade, the Reds U18s squad won the tourney after beating Fortuna Düsseldorf 2-1 in the showpiece game.

“The atmosphere was great, I would like to play here again, I am only 17 and could be there again next year, I liked it here, ” Bobby Adekanye said.

Ibadan-born Adekanye, who is a Dutch youth international, has played ten games for Liverpool U18s in the U18 Premier League this season.