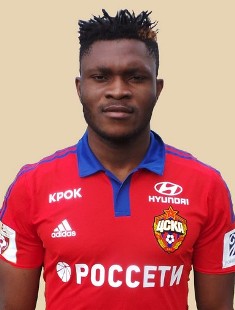 Allnigeriasoccer.com understands that Aaron Samuel will resume training at at his parent club Guangzhou R&F on Monday, January 16 after spending the last eight months on the sidelines.

The Super Eagles striker ended the 2015-2016 season prematurely on May 2, 2016 when he damaged his knee ligaments during the first half of the Russian Cup final against Zenit St Petersburg.

Samuel didn’t suffer any relapse during his rehabilitation, and the Guangzhou R&F coaches will start running the rule over the Nigerian in order to determine his fitness as from early next week.

He is expected to return to Guangzhou this weekend.