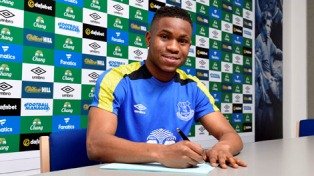 Ademola Lookman could make his debut for Everton in Sunday’s Premier League clash with Manchester City at Goodison Park, The Toffees manager Ronald Koeman has confirmed.

The England U20 international was not available for selection last weekend against Leicester City in the Emirates FA Cup because he was cup-tied.

When asked if  Morgan Schneiderlin and Lookman will be involved against the Citizens, Koeman said : “Morgan’s fitness is okay. He’s not had a lot of game-time but to improve that you need to play and you need minutes.

“We will make a decision tomorrow, but he’ll be involved in the squad on Sunday.

“Ademola also has a chance to be involved.”

The 19-year-old Lookman ended his association with Charlton Athletic this month after penning a four-and-a-half-year contract with Everton.