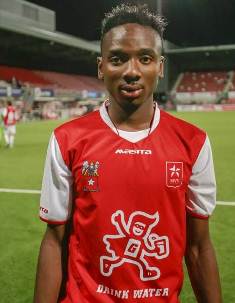 Nigeria U20 international Kelechi Nwakali has been named the most outstanding player in the Dutch Eerste Divisie for the last round of matches.

Celebrated football magazine Voetbal International has picked the best three players that were in action, with the Flying Eagles skipper and MVV Maastricht teammate Alessandro Ciranni awarded the highest mark, eight out of a possible ten.

In addition, Nwakali was included in the Team of the Week, and occupied the left side of the attack in a 4-3-3 formation.

“Once he was the star of an African youth tournament. Arsenal picked him up and Londoners have sent their talented Nigerian for a season in Maastricht, ” VI wrote.

“Nwakali gives MVV something extra. Everyone sees the qualities of Nwakali. ”

Kelechi Nwakali, 18, has started eight of the last nine games contested by MVV Maastricht in the Dutch second-tier.