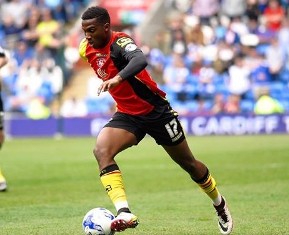 Allnigeriasoccer.com understands that EFL League One club Bolton Wanderers are on the verge of announcing the loan signing of Nigeria target Viv Solomon-Otabor from Birmingham City.

The exciting winger is on his way to BL6 6JW, where he is expected to undergo a medical with The Trotters before his unveiling later today.

Oxford United and Sheffield United were credited with an interest for Viv Solomon-Otabor, but he decided to move to Bolton, where he is guaranteed more playing opportunities.

Solomon-Otabor joined Birmingham City from Crystal Palace in 2012 and rose through the ranks before he made his first-team debut against Gillingham in the League Cup in 2015.

He has trained with the Nigerian Olympic National Team in the past.