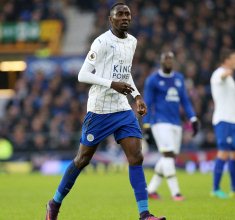 Former Racing Genk star Wilfred Ndidi was the most outstanding player for Leicester City in their 3-0 loss to Manchester United at the King Power Stadium on Sunday evening.

BBC Leicester have announced via official sources that the Nigeria international won the Man of the Match award for his impressive performance against the Red Devils.

Ndidi, 20, recorded his fourth appearance in the Premier League versus Manchester United, and he put in a full shift in midfield.

Two quick goals from Mkhitaryan and Ibrahimovioc gave the visitors a two-goal advantage at the end of the first half, before Juan Mata’s 49th minute strike closed the scoring.