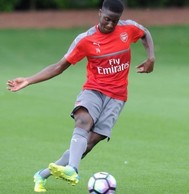 Promising Nigerian defender Joseph Olowu is getting closer and closer to making his first-team debut for Arsenal.

The teenager was handed his U23 debut versus Bournemouth in a pre-season fixture back in July, and has played two more games for the squad in Premier League 2 this season.

On Monday, the talented defender was in action for 90 minutes as Arsenal U23s lost 1-0 to Everton in the league.

Olowu penned a scholarship deal with Arsenal in the summer of 2016.