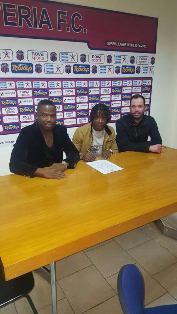 The 27-year-old was training with one of his former clubs, AIK Stockholm, before he agreed terms with Veria.

For the remainder of this season, Igboananike, who is also in the possession of a Swedish passport, will suit up with the number 77 kit, allnigeriasoccer.com has been informed.

A product of Dynamo Football Academy, the striker previously had spells with Djurgården, Vasalund, AIK, Chicago Fire and DC United.

Igboananike will start training with his new teammates on Wednesday, February 8.

The deal that took him to Veria was brokered by his intermediary, Swedish-based Innocent Okeke.