Arsenal Snatched Nigerian Whizkid, Dubbed The New Depay, From Under Noses Of Liverpool 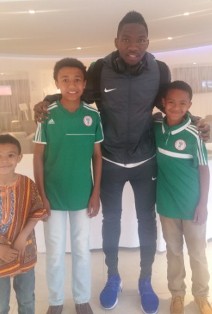 Premier League side Arsenal have won the race for the highly-rated Nigeria teenager Lateef Omidiji Jr, who was being monitored by a plethora of European powerhouses.

In one of the most closely guarded secrets of the transfer market, the Gunners beat their competitors, Liverpool and Chelsea, because they were more proactive.

“Chelsea came as well, so did Liverpool, to try and build a relationship early but Arsenal came with an offer that could not be turned down, ” a top source told allnigeriasoccer.com.

“Arsenal saw his potential and said they will invest in his growth. He is focused on his craft.

“Lateef will train in London a couple of times a year, and their coaches will come from there to the Netherlands to monitor him frequently and give him tips. ”

The pacy Lateef Omidiji Jr has been labelled the Next Memphis Depay in the Netherlands.