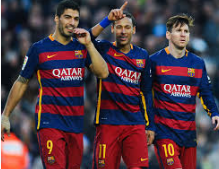 Former Barcelona defender Gbenga Okunowo was disappointed after the Spanish champions surprisingly lost 4-0 to Paris Saint-Germain on Tuesday night in the Champions League Round of 16, Game 1.

Okunowo, who spent three years with Barca, reckons that Luis Enrique’s side are faced with a mountain to climb to overturn the 4-0 deficit at the Camp Nou on March 8.

“For a big club like Barcelona to lose that way is worrisome. They will be feeling bad in Barcelona, ” Okunowo told allnigeriasoccer.com.

“Why they lost? It depends on the coach and Barcelona, they have to look into it. Not too good for a club to lose 4-0.

“This is football, anything can happen. At the moment it will be difficult for them to qualify for the next round. ”

A brace from Angel Di Maria, along with strikes from Julian Draxler and Edinson Cavani secured the win for the French champions at the Parc des Princes.