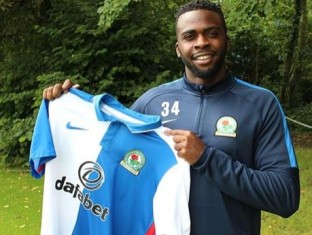 The much anticipated individual battle between Blackburn Rovers star Hope Akpan and Manchester United midfielder Paul Pogba this weekend will not take place after all.

Rovers have confirmed via their official webpage that the Nigeria international will miss their next three matches in the wake of his first red card for the club in their 2-1 loss to Sheffield Wednesday on Valentine’s Day.

Thus, Akpan will not be available for selection when Manchester United travel to BB2 4JF on Sunday for an Emirates FA Cup fifth round clash.

In addition, the defensive midfielder will miss games against Burton Albion (Feb. 24) and Derby County (Feb 28).

Hope Akpan was shown a red card in the closing minutes of the game week 32 clash at Hillsborough Stadium for pushing the referee after his goal was disallowed.