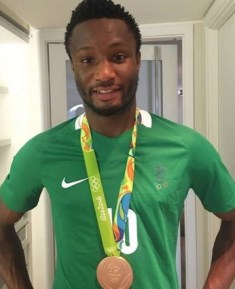 Olympiakos striker Brown Ideye has agreed personal terms with Tianjin Teda, and what remains before an official announcement is made is for the Chinese and Greek clubs to reach an agreement on the transfer fee.

Contra.gr has reported that Greek Super League champions Olympiakos rejected the first offer made by Tianjin Teda and they have planned a fresh bid for the striker’s services.

The key people that are convincing Ideye to join Tianjin Teda are John Obi Mikel and their Portuguese coach Jaime Pacheco, who is close to his agent based in England.

Tianjin Teda chiefs arrived in Athens on Sunday to thrash out terms with Olympiakos.