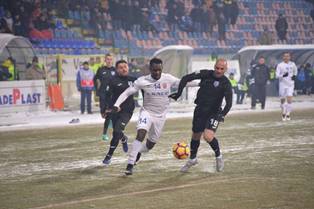 Benjamin Kuku took his tally to two goals in three games after finding the net in BotoĂ…źani’s 3-1 win over Pandurii Târgu Jiu in the Romanian top-flight on Sunday.

The 21-year-old has refused to get carried away with his recent form and admitted that he is still learning his craft.

“I want to be  more better in every game, if possible scoring in every game will be awesome but that needs the grace of God and lot of hard work sincerely,” Kuku told allnigeriasoccer.com.

“I just think of scoring as many goals as I can. And I am very grateful to God. ”

In the first half of the season, Kuku registered his name on the scoresheet two times for former club Târgu MureĂ…ź.