...the complete Nigerian football portal
Subscribe
Ex-Vitesse Striker Dauda : They Refused To Play Me Because I Am Not From Chelsea
Published: February 28, 2017 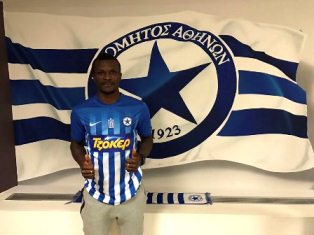 Abiola Dauda has opined that he found game time hard to come by in his last two seasons with Vitesse because he had no contractual relationship with Premier League side Chelsea.

Dauda has made a very important, though controversial statement, as England U20 striker Dominic Solanke, on loan from the Blues, was preferred ahead of him in the pecking order of strikers last term.

And before the Swedish-Nigerian frontman joined Atromitos last month, Brazil youth-team striker and Chelsea loanee Nathan was playing regularly for Vitesse while he was sent to the reserves.

“I do not know what happened, I was put off the squad. The close relationship of Vitesse with Chelsea might have been the cause, ” Dauda told contra.gr.

“Often they brings players to Vitesse who need to participate in games. I certainly do not belong to Chelsea, so I was omitted.”

Dauda added : “Nobody came to tell me officially what happened. I became the last option in the offensive.

“I told my coach that I have to play, I am not happy on the bench and stands. They still get someone from Chelsea.”

Dauda, 29, has played for teams in Sweden, Serbia, Netherlands and Scotland.