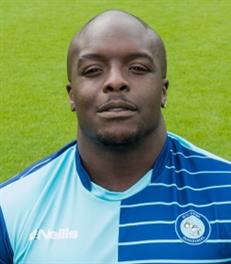 Adebayo Akinfenwa scored twice as Wycombe Wanderers were held to a 2-2 draw at Accrington Stanley in League Two on Tuesday night.

The powerful Nigerian striker restored parity for The Blues in the 56th minute before he grabbed his brace two minutes later.

His brace against Accrington Stanley took his tally for the season to 16 goals in all competitions, of which ten were scored in the English fourth-tier.

Bayo netted four times for Wycombe Wanderers in the EFL trophy and scored two goals in the Emirates FA Cup.

The 34-year-old Akinfenwa has played for Gillingham, Northampton Town and AFC Wimbledon in the last seven years.