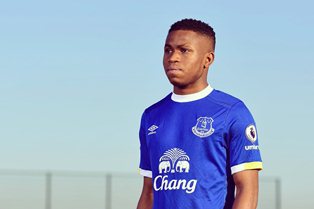 Everton striker Ademola Lookman has turned down an opportunity to represent Nigeria ahead of their international friendlies against Senegal and Burkina Faso in London.

Super Eagles coach Gernot Rohr had contacted the former Charlton Athletic wonderkid, through an intermediary, regarding the possibility of representing Nigeria but he gave a negative response, thus he was omitted from the 25-man list.

“Rohr discussed  with the player through his  representative in England  recently  but could not convince him to commit his international allegiance to Nigeria, ”  wrote the Punch.

“Rohr’s  discussion with Lookman came after  the  Daily Mirror reported that  the player’s representatives met with some NFF  officials in London.”

Lookman’s decision not to commit his international future to the Super Eagles for the time being won’t be a surprise as he is expected to represent England at the 2017 Fifa U20 World Cup which begins in South Korea in the next two months.

The 19-year-old debuted for England U19s last year before he was promoted to the U20 squad .