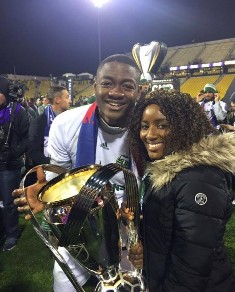 Fanendo Adi, who was recently named the second best target man in Major League Soccer, has not wasted time in justifying the tag of being one of the top stars in the American top-flight.

In the first minute of stoppage time, Adi netted his first goal of the game following a counter attack, before adding more gloss to the scoreline two minutes later.

The 26-year-old joined Portland Timbers in May 2014 from FC Copenhagen.