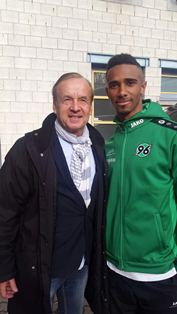 Hannover striker Noah Joel Sarenren Bazee, 20, is struggling to overcome a knee injury ahead of a potential debut against Senegal in about two weeks time.

With Super Eagles coach Gernot Rohr reportedly watching from the stands, the Stadthagen-born youngster had to be substituted after 58 minutes in last weekend’s defeat at Karlsruher because of a minor knee problem.

Because of that ailment, Sarenren Bazee sat out training on Tuesday but the good news is that he trained fully with the squad on Wednesday.

Days leading up to the clash against KSC, the Hannover coach had been sweating on his fitness but he recovered in time.

Of a possible 23 games in the 2 Bundesliga, Bazee has only 11 appearances under his belt, having missed the first ten games of the season because of an operation.