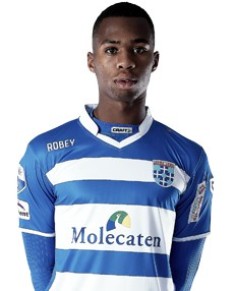 Versatile PEC Zwolle winger Kingsley Ehizibue is the Dutch-based player being considered as a late addition to the Super Eagles roster ahead of their upcoming international friendlies against Senegal and Burkina Faso.

Scorenigeria.com has claimed that Super Eagles coach Rohr was in contact with Ehizibue’s intermediary this week regarding the possibility of representing the national team.

Born in Munich to Nigerian parents, the 21-year-old is eligible to represent Nigeria, Netherlands and Germany at international level, and has a cap for Netherlands U21 squad.

Back in October, Ehizibue’s agent Wessel Weezenberg acknowledged that the Nigerian Federation were testing the waters regarding his client playing for the Super Eagles, but stressed that the player has to establish himself in the first team squad of PEC Zwolle before making a decision about his international future.

“Until now it (playing for Nigeria) has only be a topic of superficial discussion with both players as their main focus is to become regular first team players at their respective clubs, ” Wessel Weezenberg told allnigeriasoccer.com.

Former Feyenoord star Weezenberg also handles the affairs of Tyronne Ebuehi, who has now agreed to play for the Super Eagles ahead of the Netherlands.