...the complete Nigerian football portal
Subscribe
Troost-Ekong Glad To Play For Gent Again, Team Yet To Concede With Defender In Line-Up
Published: March 14, 2017 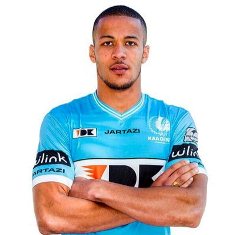 Super Eagles central defender William Troost-Ekong has spoken about his happiness after he returned to Gent’s starting eleven in the 3-0 win over KV Mechelen, a result that saw the De Buffalo’s qualify for the play-off 1.

Prior to the encounter at the Ghelamco Arena on Sunday, Troost-Ekong had not featured for Gent since January 25 when he lasted 90 minutes on the pitch versus KSC Lokeren.

“During the discussion before the game I knew I was allowed to play, a chance to prove myself. And I’m glad I can contribute my part in this important game, ” Troost-Ekong told the official website of Gent in his post match comments on Sunday.

“If I had stress? Obviously there was a little, but I had to focus primarily on my own tasks.

“My previous two games were good so I also drew confidence. Anyway, we did as a team today, what we should do.”

Troost-Ekong, 23, has assisted the Gent goalkeeper post three shutouts in the three games he played in the league.