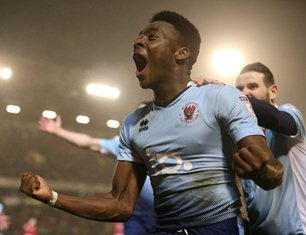 Bright Osayi-Samuel is in the form of his life, with the Nigerian-born winger netting his third goal in two games in Blackpool’s 2-1 win over Hartlepool United in the League Two on Saturday afternoon.

The 19-year-old cancelled out Lewis Alessandra’s opener with a neat finish into the far corner in the 21st minute.

Fifteen minutes after Osayi-Samuel scored his fourth goal in all competitions, Hartlepool United defender Liam Donnelly was yellow carded for fouling him.

The talented youngster was talk of the town after he assisted himself to score his second goal of the game in the Tangerines 3-1 win at Newport County last weekend.

Regarded as one of the most promising teenagers in League Two, Osayi-Samuel has been linked with possible moves to Arsenal, Tottenham Hotpsur, Everton and Aston Villa in the summer.