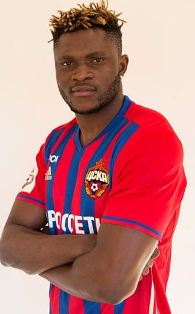 CSKA Moscow striker Aaron Samuel has declared that Barcelona are his favourite club, and was pleased that the La Liga champions qualified for the Champions League quarterfinals after a memorable game versus PSG.

“My favorite football player is Zlatan Ibrahimovic, and my favorite team is Barcelona, ” Samuel told cskainfo.com.

“The game between Barcelona and PSG was incredible. It’s very cool to comeback from four goals down and win 6: 1.

“It seems that this is the first time that in the history of the Champions League a team came from four goals down. I was very happy, because my team, Barca, did this.”

In his second spell with CSKA Moscow, Samuel has played three games for the side in the Russian Premier League.