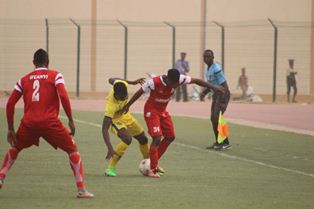 Best Deemua is one of the hottest, albeit unheralded prospects, in the Nigeria Professional Football League (NPFL).

Little known outside his immediate surroundings, the Rivers United starlet is highly rated by teammates, coaches and fans of the Port Harcourt club.

He made his debut in United’s 4-0 win over Kaduna United in the Federation Cup (Nigeria’s oldest football competition) last season and shone like a million stars.

The then 17-year-old slotted into the trequarista role saddled upon him by technical manager, Stanley Eguma with aplomb and dictated play in midfield with the guile of a veteran.

He provided the assist for a stupendous goal by Chinonso Okonkwo and was overwhelming choice for the man of the match (MOTM) award as United won at a canter at the Aper Aku Stadium, Makurdi.

The 18-year-old finally got his chance in the big time on Sunday as he was given the nod to start Rivers United’s match day 17 NPFL game away to Gombe United.

It wasn’t exactly a debut to set the pulses racing as a psychologically-brittle Rivers United side struggled for fluidity and cohesion early on at the Pantami Stadium.

In the midst of all the chaos however, Deemua did show some sparks of magic and the consensus amongst many who saw the contest was that big things are to be expected from the ‘little man’ in the coming days.