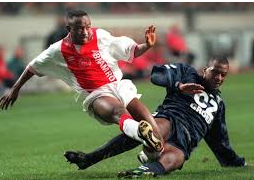 Denmark international Lasse Schöne helped Ajax Amsterdam to register a crucial 2-1 win over Feyenoord on Sunday in the Eredivisie after scoring from a free-kick outside the area.

Despite finding the net after 53 seconds, the midfielder is not the player that has scored the fastest goal in games between Ajax and Feyenoord.

In third position is retired Nigeria international Tijani Babangida, who struck after 148 seconds as Ajax thrashed the team from Rotterdam 3-0 at the Amsterdam ArenA on February 23, 1997.

Babangida signed for Ajax from Roda in 1996 and remained on the payroll of the club for seven years before joining Changchun Yatai.