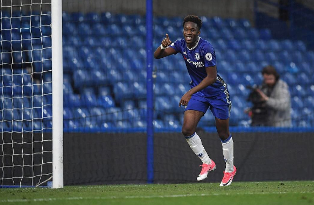 Chelsea U23s have climbed to fourth on the Premier League 2 (Division 1) table following their 3-0 rout of Sunderland U23s at Stamford Bridge on Friday night.

On 38 minutes, English-born Nigerian wonderkid Ike Ugbo doubled The Blues advantage with a diving header that found the back of the net.

Five minutes after the intermission, the England youth-teamer increased his tally this season to 20 goals across all competitions, firing home a rebound after his teammate had been denied by the Black Cats goalkeeper.

A half-time switch that saw Super Eagles invitee for the London training camp, Josh Maja, replace Sweden U21 international of Nigerian descent Joel Asoro did not pay dividends for Sunderland, as the striker fired blanks.

Eight of Ugbo’s goals came in the FA Youth Cup, he has also amassed eight goals in Premier League 2, and tallied two goals each in the U18 Premier League and EFL Trophy.