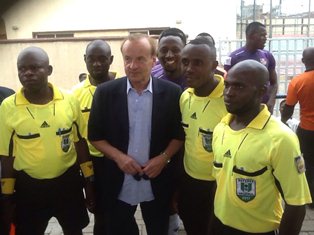 Super Eagles coach Gernot Rohr was among the spectators at the Agege Township Stadium for Sunday's Nigerian Professional Football League clash between Mountain of Fire FC and El-Kanemi Warriors.

As previously reported by allnigeriasoccer.com, the German tactician was at the venue to run the rule over the top stars on both teams, including Stephen Odey, Onuwa Chukwuka and Sikiru Olatunbosun.

Odey strengthened his claims for a Super Eagles call-up when he netted his fourteenth league goal from the spot in the 45th minute.

Apart from winning the CNN Goal of the Week last month, Olatunbosun showed why he has been one of the stars in the NPFL this season and must have impressed Rohr after netting his fifth goal just before the half-hour mark.

Gernot Rohr was impressed with the tactical awareness exhibited by both teams, stating that they were well organized.