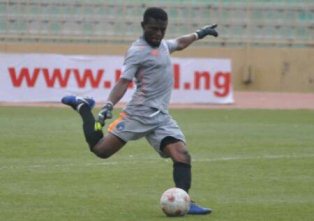 Enyimba goalkeeper, Fatau Dauda was suspended for one match and fined N50,000 (approximately $123) for aggression towards a ball boy during their match against Katsina United.

Dauda was charged for breaches of Rules C11 and C1 which included assault on a ball boy and acts capable of inciting others to commit violence during their match day 18 fixture against Katsina United.

Rabiu Ali and Murtala Adamu of Kano Pillars were also sanctioned for threatening of the Referee and conducted themselves in a manner that was capable of inciting others to commit violence or misconduct which constituted a breach of Rule C1 and consequently suspended for one match.

The clubs and players were given 48 hours to submit in writing to the decisions of the LMC or elect to appear before a commission and for which further sanctions would be imposed should their appeals not be upheld.

The club is also to play the next three home matches behind closed doors two of which is suspended for a probationary period lasting the remainder of the season.