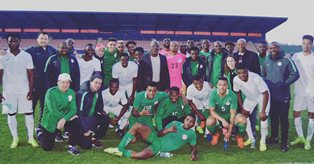 A couple of Super Eagles stars may move to the glamorous English Premier League in the near future as a number of clubs are monitoring their progress ahead of the opening of the transfer window.

It has come to light that representatives from Manchester United, Crystal Palace, Newcastle United plus West Brom were among the 2,013 spectators at the Hive Stadium on March 23 as Nigeria were held to a 1-1 draw by Senegal.

Besiktas, CSKA Moscow and Standard Liege scouts were also sighted during the friendly between the two West African opponents.

''Many European scouts came to watch the game but they will be largely disappointed that the second game against Burkina Faso didn't hold, '' a top scout who was at the Hive Stadium told allnigeriasoccer.com.

''It will be too emotional to judge a player with just one game. ''

It is assumed that Moses Simon, Wilfred Ndidi, Eddy Onazi and Oghenekaro Etebo were noticed by the scouts in attendance.