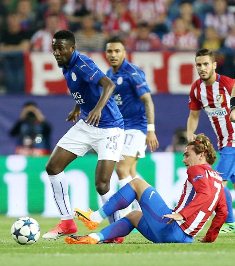 Atletico Madrid will take a slender lead to England for the second leg of their UEFA Champions League quarterfinal clash with Leicester City after they beat the Premier League champions 1-0 at the Vicente Calderon on Wednesday night.

The Spanish side attacked incessantly but could not get a crucial second goal that would set up the return leg nicely.

Leicester City were able to absorb the pressure but Atletico were given the opportunity to open the scoring when the referee pointed to the spot in the 27th minute after a silly foul on Griezmann by Marc Albrighton.

The Frenchman tucked his shot into the corner for his 24th goal of the season in all competitions.

Griezmann's effectiveness was reduced in the second half with Ndidi always at the right place to get rid of the danger, the Nigerian attempted 32 passes, the second-most by a Leicester City player tonight.

The return leg will take place at the King Power Stadium on April 18.