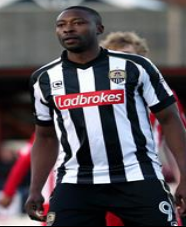 Notts County manager Kevin Nolan has hinted that Shola Ameobi, 35, might remain with the club next season despite his current contract running out in June.

The former Nigeria international penned a short-term deal in February and has endeared himself to The Magpies fans, with 4 goals in 13 League Two appearances, and was named to the EFL Team of the Week after bagging a brace against Colchester United on April 1.

''I know what he can do, that's why I brought him to the club,'' Nolan was quoted as saying by Nottingham Post.

"And it's not just what he does on the field, but off it too with his professionalism.

"He's a credit to himself as well as his family, and he's a credit to this club because he drives a lot of it in the dressing room and makes my life easier.

"I've got nothing but good things to say about Shola."

Ameobi, who numbers Stoke City, Crystal Palace, Bolton and Fleetwood Town among his former clubs in England, was teammates with Nolan at Newcastle United from 2009-2011.