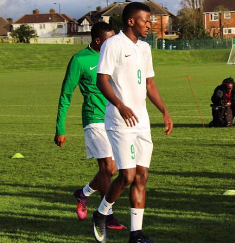 Austria Vienna striker Olanrewaju Kayode is targeting more caps for the Super Eagles having made his debut for the three-time African champions last month in a friendly versus Senegal.

Manchester City's Kelechi Iheanacho, Watford's Isaac Success, Chinese-based duo Odion Ighalo and Brown Ideye are ahead of Kayode in the pecking order of strikers at the moment, if one should analyze the call-ups since the appointment of Gernot Rohr.

"I know what to expect as Nigeria is greatly blessed with other strikers but it is only a challenge not an unhealthy rivalry," Kayode told the BBC.

"I can only look at other players who I played with at the youth World Cups like Kenneth Omeruo, Ogenyi Onazi and Ahmed Musa for inspiration."

Kayode has netted 17 goals from 41 appearances across all competitions for Austria Vienna in the current season.