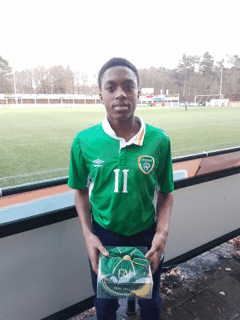 The Nigeria Football Federation are lagging behind their Republic of Ireland counterparts in the race for the services of Manchester United wonderkid Ayodeji Sotona.

The Football Association of Ireland have identified the talented winger as a future star and moved fast to cap him for their youth teams though he is eligible to represent Nigeria through his parents.

Born 2003, Deji netted on his first start for the Republic of Ireland U15s in their 1-1 draw with the Netherlands back in February.

He began his career with Mullingar Athletic AFC at the age of eight before he was snapped up by Manchester United, and rose through the ranks before eventually playing for the Red Devils U16 squad.

Deji and two other players of Nigerian descent Michael Elechi and Mipo Odubeko were named to the Manchester United U16 squad for the MIC Tournament that ended in Spain on April 16th.