Okocha Tells Iwobi Not To Move On Loan: Stay And Fight For Arsenal First Team Shirt 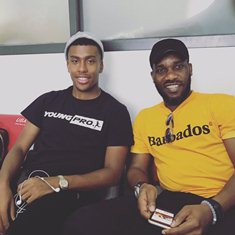 Nigeria legend Austin Okocha has advised his nephew Alex Iwobi not to think of departing Arsenal on loan next season and he should stay and fight for a first team shirt.

The Super Eagles star's playing opportunities has been sparse in the last five games contested by the Gunners in the Premier League, with only 25 minutes of game time under his belt from a possible 450.

To help Iwobi maintain his match fitness, he was a surprise inclusion in the Arsenal U23 team that beat Reading 5-2 in Premier League 2 on April 10, fueling speculation that he has been demoted to the reserves.

''We can't forget that this is his first full season in the first team and Arsenal have all their players back now. There's a lot of competition, so it's not easy," Okocha told Sky Sports.

"I think it's better for him to stay at Arsenal, because the style of play suits him perfectly.

''It might not be easy for him to go on loan and adapt somewhere else. He needs to stay and fight for his shirt."

Austin Okocha will be playing for Nigeria at an indoor six-a-side tournament, Star Sixes tournament at The O2 , in July.