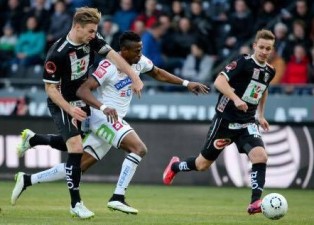 Rizespor striker Bright Edomwonyi was sent off in bizarre circumstances in his team's 3-3 draw with Istanbul Basaksehir in the Turkish Super League on Saturday.

The former Flying Eagles invitee was substituted in the 88th minute, only to be shown a red card by referee Bulent Yildirim two minutes later while he was sitting on the substitutes bench.

Bright Edomwonyi was contacted and asked why he was dismissed and he told allnigeriasoccer.com : ''They gave them an undeserved penalty and everyone was so angry (including those on the bench), and the referee came to the sidelines and gave me a red card.''

Apart from the red card incident, the Nigerian had a descent game and provided the assist for Koc's equalizer in the 42nd minute.

The 22-year-old had never been sent off in his professional career, 111 matches in total, before he picked up a red card against Istanbul BB.