...the complete Nigerian football portal
Subscribe
Why Hannover Striker Noah Bazee Will Not Be Called Up To The Next Nigeria Squad
Published: April 25, 2017 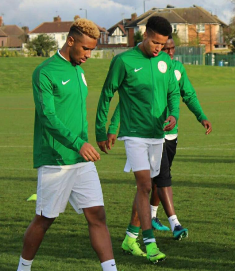 Hannover whiz-kid Noah Bazee has been ruled out of action for the rest of this season owing to a knee injury.

Thus, the 20-year-old will not be called up to the upcoming Super Eagles get-together in Corsica, despite manager Gernot Rohr proclaiming that he will begin running the rule over the striker in the next four weeks.

Bild has reported that Bazee is being examined by Dr. Ulrich Boenisch in the Augsburger Hessingpark-Clinic, and expected to go under the knife sometime this week.

''Yes, that's true. Noah gets a second opinion in Augsburg. If the decision for an operation is made, this should be done as quickly as possible, " manager Horst Heldt said.

The German-born Bazee will miss Hannover's final four games of the season against Dusseldorf, Heidenheim, Stuttgart and Sandhausen.

Nigeria manager Gernot Rohr is sweating on the fitness of his influential skipper John Obi Mikel, Odion Ighalo,Wolves goalie Carl Ikeme ahead of the Super Eagles first competitive fixture of 2017 against South Africa.