Ex-Nigeria Star : Wenger Is Under Pressure & Should Not Be Challenged For Not Playing Iwobi 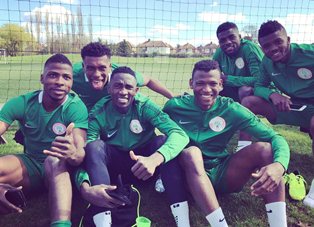 Former Nigeria international Garba Lawal has refused to criticize Arsenal manager Arsene Wenger for snubbing Alex Iwobi in recent matches, including Sunday's showdown with Manchester City in the FA Cup, stressing that the Frenchman is under pressure to deliver.

With just over a year before the 2018 World Cup, the Hale End Academy may lose his spot in the Super Eagles if his situation at Arsenal doesn't improve, but Lawal has advised him not to move on loan and do everything possible to get back in favour.

''I won't challenge Arsene Wenger to ask him why Iwobi is not playing. He was brought from the youth team,'' says Garba Lawal to allnigeriasoccer.com.

''We should ask questions, how many games did he miss? Did he miss ten games, the answer is no. Wenger has his own reasons for not playing him.''

The former Roda FJC winger added : ''Iwobi has a long way to go in football, the manager is under a lot of pressure now.  Iwobi is not a bad player and Wenger knows.

''He has to work harder for him to retain his position. Football is all about ups and down. I don't advise him to go on loan though the World Cup will hold next year.''

Since returning from Super Eagles duty last month, Alex Iwobi has only 13 minutes of game under his belt from a possible 540 for the first team of the Gunners.