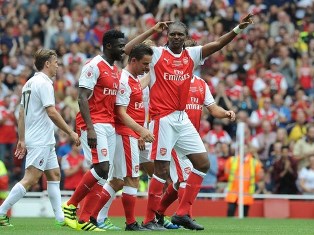 Ahead of Arsenal's trip to Tottenham Hotspur on Sunday for a crucial Premier League game, the official website of the Gunners has nominated five goals for the best goal at White Hart Lane.

A strike from Super Eagles legend Nwankwo Kanu made the shortlist along with efforts from Patrick Vieira, Tomas Rosicky, Mathieu Flamina and Robert Pires.

As at 1015 hours on Friday, the Nigerian was third behind the Crystal Palace midfielder and the Sparta Prague star.

The winner will be decided by a combination of the public votes from Arsenal supporters.

Nwankwo Kanu joined Arsenal in February 1999 from Inter Milan and helped the club win two Premier League titles plus two FA Cups before his departure in 2004.