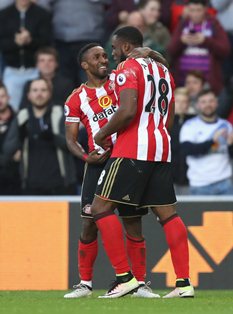 Catch up on the performances of players of Nigerian descent in the English Premier League on Saturday, April 29.

Hull City continued their fight to avoid the drop after playing out a goalless draw with Southampton at the St. Mary’ s Stadium.

No Nigerian involved in this one, with the Tigers fullback Moses Odubajo still out injured and Saints young striker Olufela Olomola not considered in their 18-man squad list.

Italy international Angelo Ogbonna is on the sidelines and sat out West Ham’ s goalless draw versus Stoke City at Bet365 Stadium.

Sunderland were mathematically relegated following their 1-0 loss to Bournemouth at the Stadium of Light.

Super Eagles striker Victor Anichebe put in a full shift, while his teammates Josh Maja and Joel Asoro were missing from the line-up. Cherries winger Jordon Ibe was a non-playing substitute.

The only goal of the game was scored by Joshua King on 88 minutes. He tapped in at the back post after an assist from Fraser.

Wilfred Ndidi started and completed the game, Ahmed Musa didn’t make the squad while ex-Arsenal youth-teamer Robson-Kanu was not selected after pulling out with a hamstring problem in training on Tuesday.