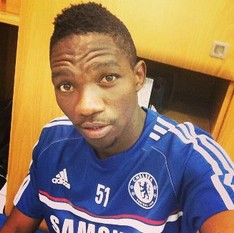 Kenneth Omeruo was sent off in Alanyasspor's 3-0 loss to Kayserispor in the Turkish Super Lig on Saturday.

The Chelsea loanee took the walk of shame in the 45th minute for a foul on Brazilian striker Welliton, who would have been in a clear goalscoring position if he had not been brought down by the Nigerian defender.

The talk leading up to today's game at the Kadir Has Sehir Stadium was for Omeruo to avoid a caution as he was on the brink of another suspension by the Turkish Federation, having accumulated three more yellow cards.

Previously, Omeruo had been dismissed two times in his professional career while defending the colours of ADO Den Haag and Middlesbrough but he received two yellow cards in both matches before he was sent off.

The Super Eagle made his 23rd appearance of the season against Kayserispor.