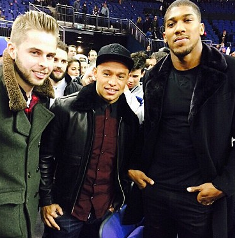 Boxing legend George Foreman is backing Arsenal fan Anthony Joshua to defeat Wladimir Klitschko when they do battle on Saturday night in front of 90,000 spectators at Wembley.

The Watford-born Nigerian boxer is aiming to retain his IBF heavyweight title and the vacant WBA (Super) and IBO titles are also on the line.

“I don’t think you’re going to be able to get him with one punch, Anthony Joshua,” Foreman told Arsenal Player, according to arsenal.com.

“He is the real deal, not some make-believe puffed-up guy. He’s an Olympic gold medalist. Everything you need, the icing on the cake, he’s got it all.”

The 27-year-old Joshua has knocked out 18 of his opponents in his previous 18 fights.

He represented Great Britain at the 2012 Olympic Games staged in London and won a gold medal in the Super Heavyweight division.