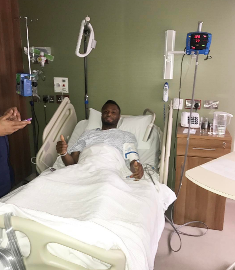 The Nigeria international had to undergo a procedure after picking up an abdominal injury at Tianjin Teda, an ailment that made him miss the last four matches in the Chinese Super League.

Mikel posted on Instagram : ''Surgery went well, rehab next... can't wait to be back ⚽️👊🏽 shame I can't be on the pitch fighting with my team #TianjinTEDA #TEDAFightingFightingFighting 💪🏽 ''

The 30-year-old had played three games before his spell on the sidelines, scoring against CQ Dangdai Lif.

He sought advice from Chelsea medical team before the surgery.