...the complete Nigerian football portal
Subscribe
Victor Moses And Chelsea Heading For The Title After Winning Battle Of The Blues
Published: April 30, 2017 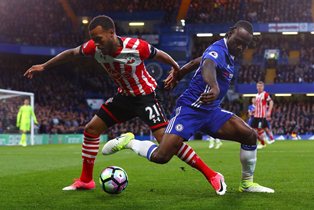 The first half started in glittering fashion with two moments in the box for the Toffees. Dominic Calvert-Lewin first hit the post, then Lukaku had a great chance to score but saw his effort cleared.

Chelsea were left off the hook in the 42nd minute. Enner Valencia directed a ball squarely in the box, but Lukaku failed to benefit from it.

Chelsea’s best chance of the half fell to Diego Costa, but his volleyed effort failed to hit the target.

Five minutes after the restart, Victor Moses had a chance to break the deadlock, but his deflected shot strayed just wide of Stekelenburg’s far-post.

The defining moment of the game came in the 66th minute when Pedro, on his left side, fired a spectacular shot from just outside the box to open the scoring.

Twelve minutes from time, Everton were exposed again. The Everton goalkeeper didn’t get a stronger touch after a free kick from Hazard and Cahill tapped in to establish a two-goal advantage.

Off the bench, Willian grabbed Chelsea’s third goal in the 86th minute when he delightfully finished off a great pass from fellow substitute Cesc Fabregas.

Everton duo Calvert-Lewin and Valencia went into the referee’s book in the first and second half respectively for fouling Super Eagles star Moses.