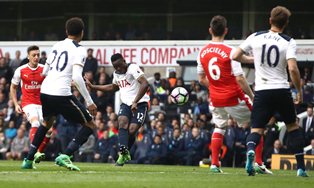 Arsenal have a lot of work to do to finish in the top four positions in the Premier League after losing 2-0 to Tottenham Hotspur in their final game at White Hart Lane on Sunday evening.

While Spurs number 20 of Nigerian descent Dele Alli was involved for 90 minutes before he subbed out, Super Eagles attacking midfielder Alex Iwobi watched proceedings from the bench.

Alli missed an unbelievable chance to give the home team the lead on 22 minutes, he failed to hit the target with a header from close range, before Christian Eriksen wasted a huge chance as he hit the crossbar with a volley.

With half-time looming, the Gunners first chance on target came from Ramsey, an unexpected shot from long range by the Welshman was punched away for a corner by Lloris.

On 48 minutes, a shot from long range by Victor Wanyama was saved by Cech and from the resultant short corner Sonny hit the right side-netting.

Nine minutes after the restart, Alli had the presence of mind to score from close range after picking up a loose ball, and Arsenal's world fell apart seventy five seconds later when referee Michael Oliver awarded a penalty against them.

Gabriel Paulista fouled Harry Kane in the box, the England striker dusted himself up and scored his sixth derby goal in five appearances against the Gunners.

Following their ninth loss of the season, Arsenal are six points behind Man City who occupy the last Champions League spot, while Spurs remain four points behind leaders Chelsea.