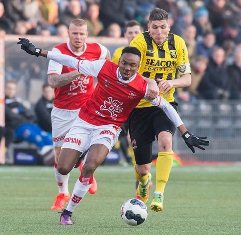 Arsenal loanee Kelechi Nwakali was not involved in MVV Maastricht's 3-1 loss to FC Volendam last Friday at the Kras Stadium.

The official word from the coach of MVV, Ron Elsen, was that the Nigeria U20 skipper was rested after complaining of fatigue, but a source close to the attacking midfielder has informed this website that he missed the game because of FC Volendam's artificial pitch.

''It's not about Kelechi being tired, it is not good for him to play on synthetic pitches. If he plays too much on the artificial pitch, it will disturb his shin, '' a top source told allnigeriasoccer.com.

''He has to rest, doctors told him he has to rest. In London, it's hard to see those pitches.

''He has resumed training with MVV and should play their next match.''

Kelechi Nwakali, 18, has made 29 appearances in all competitions for MVV this season, scoring 2 goals.