Exclusive: Five Defenders, Including Two Uncapped Players, In Line To Train With Super Eagles In Paris 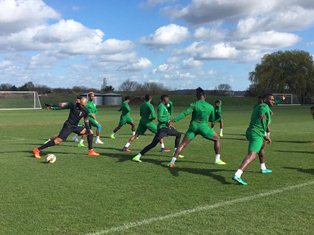 Allnigeriasoccer.com understands that five defenders have been named in the Nigeria squad for the upcoming friendly against Corsica in France on May 26.

Uncapped duo Awaziem and Ebuehi will be hoping to make their unofficial debut for the three-time African champions after missing out two months ago in London due to the cancellation of a friendly with Burkina Faso.

Abdullahi Shehu (Anorthosis Famagusta), Uche Agbo (Granada) and Wilfred Ndidi (Leicester City) were earlier classified as midfielders by this website, but the trio are equally comfortable playing defense. They will train with the squad in Paris.

It is also confirmed that Kenneth Omeruo will NOT be invited to the get-together due to club commitments with Alanyaspor.